Scottish Crofting Law: A Lesson in the Power of Differentiation & Pricing

With many thanks to the author, Dr George Beaton, who is a director of Beaton Capital and Beaton Research + Consulting, firms dedicated to professional services. This post first appeared in LegalDatum on 10 January, 2014.

The first is about a solicitor around a BBQ in Australia. Where the other guests couldn’t over-hear us, he talked about what I soon realised was an all-too-familiar story. I paraphrase.

Does this have a familiar ring?

“As a kid I grew up with three siblings and pretty much stayed at home until I graduated LLB. We all went to private schools and we flew to the Gold Coast twice a year for long holidays in one of the family’s units. My father, God bless him, ran a well-respected and prosperous small law firm in the inner suburbs. He never seemed short of cash and he never talked about the bank.

“In the course of time, I joined Dad in the practice and he retired soon thereafter because of ill-health. We didn’t lose any clients or staff; we had no debt to speak of and the work kept flowing in. That was nearly 20 years ago.

“Things began to change. Debtors became an issue so I took an overdraft to make ends meet. Our long-standing bookkeeper couldn’t explain, except to say ‘the clients aren’t who they used to be’. Clients started asking for fixed fee quotes and complained that we were much more expensive than the conveyancer who has started up close by. The local accountants progressively referred less work. And two more law practices were now in the neighbourhood. Wages and other overheads keep rising and, in spite of my marketing efforts, revenue isn’t keeping up. I work longer and longer hours, as do my two fee-earning staff. We still offer a wide range of high quality services and we are very responsive – nothing has changed since Dad’s days.

“The net result is our two children are in the perfectly good local public school and for holidays we go camping on the coast. I can’t afford to be away for more than a week or two at a time.”

The story is the same for far too many smaller firms.

This tale is a perfect illustration of what’s been happening for many years in the legal profession. Increasingly sophisticated clients, intensified competition and largely self-imposed discounting have commoditised most small – and not so small – practices. There’s no going back. The GFC is not the cause. It’s the reality of the business model of traditional professional practice.

The story illustrates what’s happening to the business model. In a mature market it is inevitable that those firms that aren’t saliently differentiated and that don’t reinvent themselves will experience static – or declining revenue – rising overheads and falling profitability. 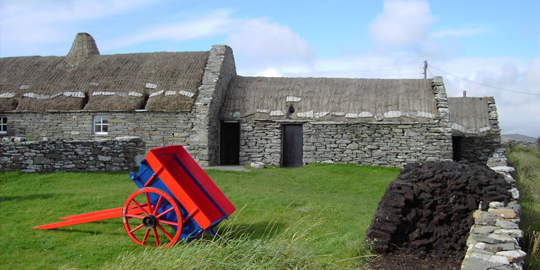 Inksters shows one way to differentiate – and why it doesn’t have to be this way.

Some firms have carved out differentiated positions that are enabling them not only to readily attract new clients, but also to resist fee degradation. Indeed some I know compete successfully in narrow niches against very much larger national and international firms. Here is the second story.

I came across this beautiful example over Hogmanay time. With the permission of Brian Inkster, here’s his Scottish solution for being differentiated: Crofting law (see footnote), Parking law and Fishing law. And here’s how he does it.

A quick look at the Inksters’ website shows more content about their niche areas than general (for which less or undifferentiated) areas of practice. The firm has targeted niche domains pointing to their specialised web pages, e.g. www.croftinglaw.com and www.parkinglaw.com. And even a niche Twitter account at @croftinglaw! There is a dedicated Crofting Law Blog distinct and separate from the main Inksters’ website: www.croftinglawblog.com This blog and the dedicated Twitter account were both referenced in debates by Members of the Scottish Parliament during the passage of a Crofting Bill in 2013. And if that’s not enough, Inksters does pop-up law for crofting: http://inksters.com/pop-uplaw.aspx. And the list goes on…. with a free crofting law helpline to members of the Scottish Crofting Federation and more. Now that’s how you build, grow and develop defensible competitive advantage.

Crofting related work provides more than a third of Inkster’s revenue. And then there’s fishing law and parking law.

Not being differentiated in some way is a recipe for being commoditised. Being commoditised means being perceived as no different to the firms next door. In other words, clients view the firm and its services as a commodity and see no reason to pay anything but the lowest price.

Compete on price at your peril.

Years of competing increasingly on price have dire consequences. Not only reducing profitability – as the first story graphically shows – but also the threat of insolvency. Reports from the UK show a third, some say a half, of all small law firms are at risk. Others predict a large proportion of ‘high street’ law firms will disappear in the next 10 years as the owners give up and close down.

And as Richard Burcher, LegalDatum’s pricing guru, so often says, "most of the cash flow problems with smaller firms start as pricing problems."

And as the two stories in this post show, one way to avoid pricing problems is to differentiate your firm.

[Crofting is a form of land tenure and small-scale food production unique to the Scottish Highlands, the islands of Scotland, and formerly on the Isle of Man. Within crofting townships, individual crofts are established on the better land, and a large area of poorer-quality hill ground is shared by all the crofters of the township for grazing.]